Posted on September 15, 2009 by stephen trimboli

you know this is about death, don’t you? well, it’ll start with death, anyway. even in death, i’m not too strong on keeping on subject, but if you’ve been here and wandered through these ramblings, you know that already.
i have little to do with any of these people other than that we’re approaching geezerdom and male (not that has anything to do with anything) with mister powell being the eldest of the lot. their approach has been halted. these contemporaries have shipped off to the great hullabaloo on “the eighth-electro-plasma-ocean of the ninth dimension”.
i started this piece yesterday but, as a believer in the “things happen in threes” rule, i waited a day.
time and eternity added jody powell.
two heart attacks and a cancer.
three people who have nothing to do with each other except they inhabited the same moments in america’s pop-political-cultural history.

i guess nyc-urban-catholicboy jim carroll was a closer tie-in to me though swayze was a better target for blind disdain, something that eroded with time. patrick swayze was a houston texas catholicboy.
jody powell was probably a baptist, but don’t quote me on that one.
time does all sorts of things; erodes, melts, fades, kills, heals, turns…everything but stops.
i wish it could stop. i wish it would stop. if only as a favor.
i swam in the ocean today, probably for the last time for this year.
also for the first time this year.
i took maxx to the land of the grifting lizards because last night the weather channel predicted and 80-degree day.
i planned this for hours.
i was interviewed a few days ago for a european publication about my opinions on the american healthcare debate.
imagine that.
i spoke to the interviewer for about an hour and by the end, i think we were both dizzy.
i found it almost impossible to stay on point because i believe everything is connected.
you know that about me by now.
i tried to explain that this wasn’t about policy but about greed and hate and race. that it was about good and evil and the fix and the lock and in the end, “luck.”
he thanked me.
i suggested he read my cancer blogs (from when i called a blog a blog and not a note) because i am a grateful recipient of a broken system and know it. i am lucky. i told him that i know many people who aren’t.
i told him that my luck will run out, just like everyone else’s.
i wondered if he felt i was as a madman after our discussion.
the next day he called me and said he wanted to photograph me for the publication.
“alright, mister deMille, i’m ready for my closeup.”
that’s what i said to the photographer when we sat in front of goodbye blue monday yesterday.
lucky me. i always wanted to use that line.
i think everyone who ever saw sunset boulevard wants to use that line at least once in their lives.
i can scratch that off my list. 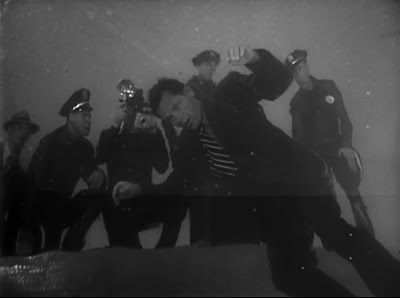 the eventuality of death looms in my mind as joe gillis floats in the opening scene of that film.
just a note to the “summer-of-death” bloggers.
summer’s not over yet.

and day by day i’ll whistle past the graveyard till my breath runs short, as in very….