oy…, so i was listening to npr a few days back…

Posted on August 3, 2009 by stephen trimboli

it’s bad enough you’re being sold out again to a gang of bandit douchebags while the corporate vampire’s teeth are still sucking at the american people’s neck; their minions are latching onto a vein in the wrist.
this seems to be the case. (as if you didn’t see this coming).
if you know me, you know that it’s pronounced “doooshbags,” where i come from, which by the way, is brooklyn. i don’t have so strong a brooklyn accent, but this word and accent were made for each other.

i overheard a part of an interview that i revisited later online with a reporter named mike taibbi talking to leonard lopate.
it regards a story he wrote in rolling stone last month about goldman-sachs.

if you had any hope for reform of the banking industry, this’ll learn you.

i never got to the point i wanted to make when i went to breezy, aka “the irish riviera” and communed with nature and the lizard guy who sounds like eduardo cianelli and looks like omar sharif a few days back with my dog, maxx, because i chose to shield myself in a reverie involving records, beer and reefer.
denial isn’t just a river in egypt.
i felt the need to see that line written. i’ve heard it for years.
i neglected to center on the conversation i had with the gateway national park federal nature reserve officer who i met as i walked the road that led me to the entrance to the beach we weren’t allowed to enter.

this note days old. suns have set and risen and set again a few times.
before i go on with this story, i need discuss where i walked my dog and what we did yesterday or the day before that.
my life is a salad full of days and nights, tossed.
we were sampling the water from a few local hydrants.
i need to tell you, dear reader, that if you haven’t sampled water from a flowing NYC hydrant, you haven’t tasted the lusciousness of the best water in the world.
seeing a running hydrant connects me to my urban childhood. 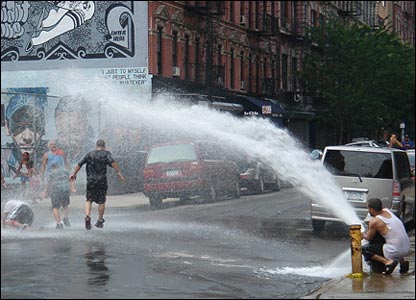 and not a childhood with those spray caps.
they happened when i was deep in teenagerdom.

of course they made sense.

but a hydrant is a hydrant in generational eyes, but like the combustion engine – especially big-block, gas-guzzling behemoths – change comes hard to a people who got the OK to live life with impunity with total disregard for the rest of the planet for so long, it’s hard to imagine that the illusion is over. that’s yet another screw in the “white guy” dilemma.
note to the american subsection of humanity – you never were in charge.
being captain kick-ass for a century or two is a hard habit to break, but it’s happening. the earth might be taking it personally.
so might china. you know them…..they’re running our tab at the bar and the bartender is getting a little nervous.
america is a well-dressed drunk who goes to the bathroom a little too often and there’s a little bit of white stuff getting crusty around the his nostrils.
america is very talkative and knows all the angles. again.
america did a few months in rehab at the end of ’08 but was told about this new pill that ends addictions of all sorts and adds moral fiber to the new lease on life the government gave them.
the purveyors of these miracle pills have tiny, razor-sharp teeth.
i know this because it came to me in a dream i had after eating chinese food. i called the order in and asked if they had any MSG and they said “yes.”
i asked, “could you put lots of that stuff in my order, please,” and the lady said, “of course.”
i said “thank you.”

but that’s another story. i was talking about nyc hydrant water.
someone might start about how this water is being wasted, running as it is into the curb only to find its way into a sewer and they’d be right; for them, i say this – sorry, i didn’t do it and i don’t have the wrench needed to turn the thing off.
me and maxx sauntered around my ‘hood and drank from the wellspring located around the corner and and a few others in the surrounding blocks.
maxx couldn’t have enough of it. he drank like there hadn’t been water in his bowl in years.
i crouched down, cupping my hand and felt the cool water run over it as i drank in the decades. my knees stopped aching and had nothing more on my mind than “what’s next? never mind.”
maxx stood beside me as i lowered my head and let the water stream through my 1961 crewcut, my eyes closed, the splashing sound of water on pavement not so dissimilar than the stream in south fallsburg hitting centuries-old stone as the water headed past our points of existence ten years later when my hair was a foot longer, my head at the same angle there and then as it was this night on dodworth street almost forty years later and i can swear it’s the same question in my mind.
“what’s next? never mind.”
nothing else.
i run my hands through my soaked, thinning hair as the hydrant water runs over my closed eyes. i rub my face as if washing it and whip my head back using centrifugal force to free the excess water from me.
dogs are better at this than me.
maxx returns to the stream to drink deep one more time.
i rise, my knees reminding me that i have returned to the 21st century.
“shit, i could catch cold all over again” i think. “it’s pretty cool tonight.”
“fuck it,” i say in an exaggerated whisper to no one in particular, least of all myself.

now i will go on. it’s what i do.
after all, i was talking about a conversation with a member of the best and the brightest of mars’ con-artist lizards, those who look at us in terms of deliciousness and pinkness, as extraordinary morsels chiseled and ground sinew and bone, blood and a suit, just another part of the celestial food-chain.
thank goodness i don’t matter to them.
thanks goodness i haven’t been scooped up by those aliens who use humanity as batteries. if you’re reading this, you’re as lucky as i am.
maybe luckier. maybe you’re young or loved or happy or grateful. maybe you’re not. maybe it’ll change, maybe it won’t.
whatever it is, you’re not a martian grifter’s meal and suit and you haven’t been stolen away by those others (the grifting lizards refuse to tell me more about) who scoop up humanity and use us as an energy source.
when they got you, you’ve run out of luck.

it was on this road that the pickup truck growled behind me as i walked with maxx.
i was wearing (for the first time) a set of binoculars, for on this day, i became a “bird watcher.”
i’m not sure how long this’ll be a focus (pardon the pun) of my time out here once september 15th rolls around – when maxx can hit the beach without fear of federal charges being filed (by means of a summons) – but i decided on this trip to give it a shot until i could make enough money to get a camera upgrade – you know, a camera with a grown-up “zoom lens,” or maybe even a “telephoto lens.”
i’ve been talking this stuff for a while and it’s become even more of a passion since hearing from a one Tracy Palmer. she was a Scrap Bar child (by way of texas) who i friended up within 1989, who is a wonderful nature photographer and renewed a friendship after twenty-year snooze by way of the innernet.
we met in 1989, shortly after my being beaten to unconsciousness by a couple of psychos on a steroid-rage-beat-a-thon that i witnessed happening to the manager of a band called savoy brown.
it was in front of a new, west-side venue called “Kaos.”
this was around the time of the first big push to save the brazilian rainforest and there were benefits all over the place and i had somehow gotten joey ramone (we had gotten past the “rough-patch” in our relationship) to commit to record with debbie harry on a benefit album.
or maybe i dreamed all this.
well, scrap bar was on board and involved in this night of celebrity pool playing (not “pool-playing celebrities” but “celebrities playing pool”) at some place in the twenties on broadway where you can pay too much for a game of pool in the basement and feast on lush dining at street level.
i don’t remember the name of the place. but it sure had high ceilings and i’ll bet the pool tables are gone, but if gambling were legal in NYC, they’d have card tables all over the place.
cards tables are the new pool tables.
i met one of my heroes at this event, richie havens.
he had great weed. he was a nice person.
i first heard of him when he appeared on the johnny carson show in 1967. he performed a song called “high-flying bird.”
i bought that album a day later.

but i digress.
all of these celebrity-pool-players (Richie havens among them) were heading to play at this Kaos place, because that’s where the fundraising concert was being held after the pool game-benefit.
i, like everyone else, headed to Kaos.
this place had a small jet “crashed” into the front of the place as an awning, like the hard rock had the back of the caddy.
and that’s where i was witnessing this guy getting a beating. i didn’t know who, what or why, so i was skirting the action, trying to just get inside. (i had a laminate, dude….)
the attackers were muscular white guys who were delighting in their abuse of the somewhat nebbish-y guy who looked as aggressive as a forty-year-old, jewish hippie.
which of course, what he was.
it’s like i woke them from a dream of beating up a nebbishy guy and came over and immediately began kicking my ass for it.
the action was so fast and furious, the next thing i remember was a policeman rousing me to consciousness. i was laying in the curb in front of the place where i was beaten. the policeman, saying to the other cop, “hey – it’s steve, that scrap bar guy.”
then a bunch of motorcycles pulled up and it was members of new york’s premier motorcycle club, and the president (his name was butch) also standing over me asking me if i was ok.
apparently, when those guys began to beat me to dreamland, victim number one got away and phoned the police.
with the sirens’ approach, the assailants scooted or hid in the crowd inside. i didn’t much care.
the police asked me if i wanted to go to the hospital and get checked out.
i opted for a drive back to scrap bar.
those guys were arrested and went to jail for the weekend. and were charged with a few cases of assault.
i would find out that one of these douchebags (remember how to pronounce it, now…) was one of the owners of the place.
frat-boy gone wild.
what happened in the end;
sonny boy paid plenty for his legal representation but was able to have the charges dropped.
Kaos closed shortly after nonetheless.

this has nothing to do with anything, except i met tracy palmer a short time after this happened.
so, uh…to be continued.

One Response to oy…, so i was listening to npr a few days back…